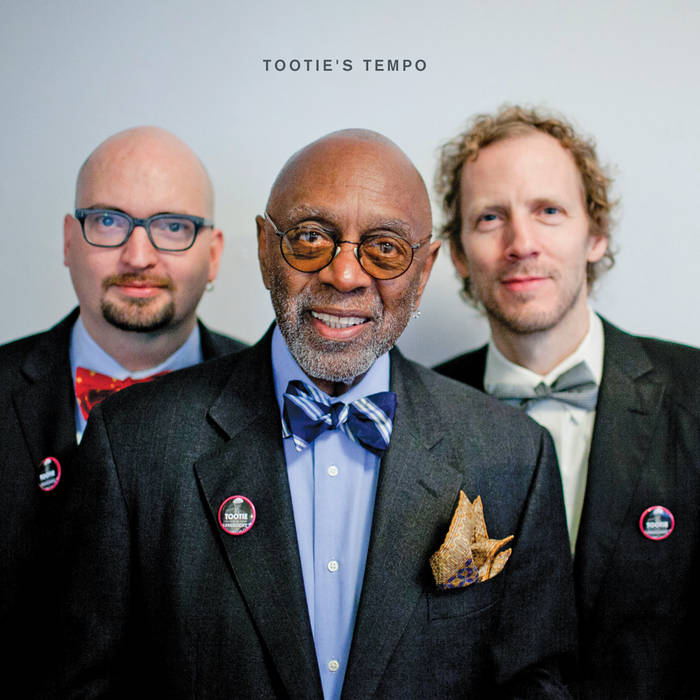 derekvanheel I saw these three perform together at Smalls (though I don't think it was the performance recorded here). I've loved Iverson's work with the Bad Plus for years, and to see him team up with a legend like Tootie is just stellar.

Opportunities for jazz musicians to perform with the music’s legendary figures are becoming more and more rare. The value in working with, and learning from, these elder statesmen has been elemental in the development of jazz music, and critical to the shape of the music.

Drummer Albert “Tootie” Heath is not only a living bridge to the heroes of the golden age of jazz but he was also critical in the evolution of drumming during one of jazz’s most fertile periods. Both pianist Ethan Iverson and bassist Ben Street realize the importance of their collaboration with Heath. The trio’s new recording Tootie’s Tempo is a showcase of the group’s fantastic interplay in the style that Heath grew up with and has perfected, bebop.

Heath, of course, is a member of one of the first families of jazz, the Heath Brothers. Along with bassist Percy and saxophonist Jimmy, the Philadelphia raised drummer became a first call player, his playing featured on a wide range of projects, from the tradition of Lester Young and Ben Webster to the abstractions of Anthony Braxton and Roscoe Mitchell. Throughout his professional career of over fifty years, Heath has remained a crucial link to the art of bebop drumming.

Iverson and Street are two musicians steeped in tradition because of their study of and participation with members of the jazz pantheon. Iverson is best known as pianist and contributing composer with the Bad Plus. He has also led a number of his own ensembles and has been an important member of ensembles with Billy Hart and Tim Berne. Ben Street has become one of the most in demand bassists in jazz and has been a member of ensembles led by Daniló Perez, Sam Rivers and Kurt Rosenwinkel.

The trio of Heath, Iverson and Street has been together for nearly five years. Iverson led a number of “standards” gigs at Smalls Jazz Club in New York City in 2009. On Billy Hart’s recommendation, Iverson asked Heath to sub one night and the drummer accepted. There were two performances at Smalls, one of which was recorded for the Small’s Jazz Club record label. The group has convened for a recent residency at the famed Village Vanguard in New York City, adding more new repertoire to their book.

The recording begins with an inventively percussive rendition of James P. Johnson’s classic “The Charleston.” Henry Mancini’s “Charade” is a lilting ballad showcasing the group’s ear for musical exchange. The mysterious “Danube Incident” is a composition by Lalo Schifrin that the trio handles in cinematic fashion. On Edgar Sampson’s “Stompin’ At the Savoy,”the trio takes a debonair spin on the classic, featuring a distinguished solo from Street. Matt Dennis’s “Violets for Your Furs” is a familiar tune for Heath, as he played it on his first recording session – John Coltrane’s Coltrane (Prestige PRLP 7105, 1957) – when he was 22 years old. The trio’s strolling take is especially affecting.

Strayhorn’s “The Intimacy of the Blues” and Jobim’s “How Insensitive” find beauty in simplicity through traditions from two continents: the blues of the United States and the bossa nova of Brazil. The trio performs Mal Waldron’s off kilter “Fire Waltz” with zest. “Cute” shows how fulfilling the sound of tasteful drums with a dynamic bass can be. It is fascinating to hear the trio’s take on Paul Motian’s hymn-like “It Should Have Happened a Long Time Ago” with Heath’s intriguing interpretation. “Tootie’s Tempo” is a solo drum rendition of Frank Foster’s “Shiny Stockings” and is a master class on swing.

Albert “Tootie” Heath has had an extraordinary and innovative career. His innate abilities in manipulating tempo and texture have influenced generations of musicians, including his trio mates, Iverson and Street, who delight in the challenge of playing with him. It is moving to hear Tootie’s Tempo, a recording that eschews reverence to deliver a terrific musical statement of depth and profundity.

Bandcamp Daily  your guide to the world of Bandcamp